Well an update has been long overdue! Around the conclusion of Omens of War we joined forces with a great team in Imperceptible to form a renewed MIM under the banner of :


Magus Imperceptible Magicus​
As a renewed team we went forth and conquered new and challenging content that many have not seen before. We also have started forming new friendships along the way that we hope will enhance our future gaming life. We are looking forward to The Serpent Spine expansion in the next month so if you have been considering returning to the Coirnav server now is a great time to come back and get ready. We have openings for a number of classes to strengthen our raiding crew and meet new friends.

Omens of War more than down....

What can I say about Omens of war?

Tons of fun, that's what! From storming through Anguish on our first attempt, to collectively gathering epics left and right. What a ride it has been MIM is a collection of friends, people who put others first, and it's been a fantastic ride so far this expansion. If you're looking for a home where you can be appreciated, get the help you need to improve your character, but more importantly, develop relationships that extend beyond the pixels, consider reaching out to one of our leadership to get your application started.

Just a fun picture from the end of last nights raiding. 3 cleric epic 2.0's finished in succession. Because our clerics are the best, and they deserve the best! Other clerics be jealous, I know... 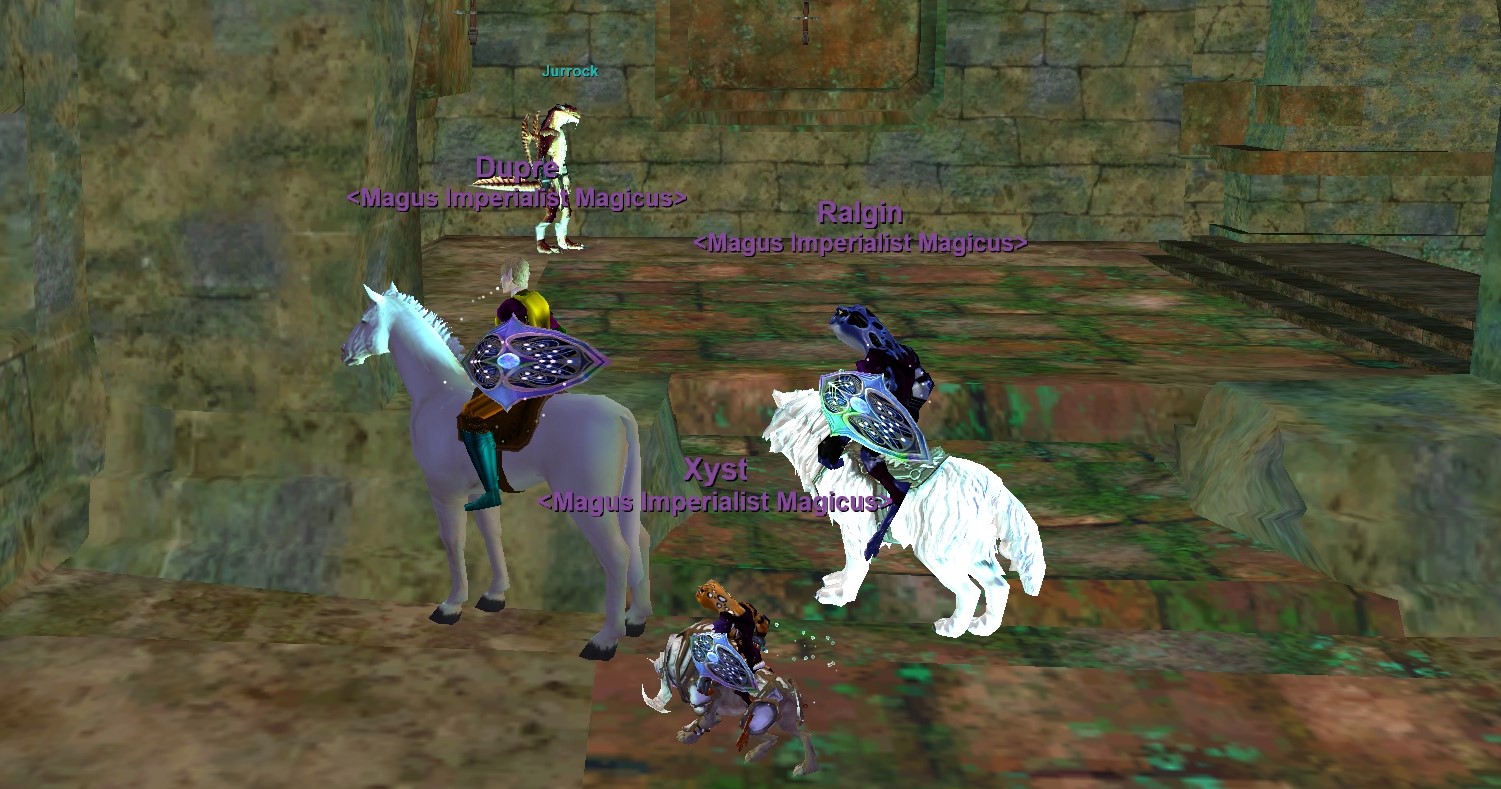 - Made significant changes to fade and leap abilities. See the AA section for details.

- - Rogue - Escape - Reduced the reuse of ranks 3-11 and added rank 12 resulting in a 1.5-minute reuse timer at level 85. This ability now consumes 2% of your maximum endurance to activate.

- Messages sent using tell windows are now logged correctly.
- /pick will now send players and group members to the evac point of a zone.
- Corrected an issue where days entitled could be incorrect when logging in by bypassing the LaunchPad, resulting in issues with claiming veteran rewards and easily becoming marked as spam.
Click to expand...

There were a lot of AA changes that don't seem to pertain to us yet, but if you'd like to see what's in store, read it here.

New Expansion? Yes.
Rehashing old zones again? Affirmative.
Exorbitantly priced packs to sucker you into spending a weeks salary on a 40 slot bag and a couple of potions? Absolutely.
New ice shaders after 20 years instead of fixing the issues this game has using the resources of modern hardware? Yup.

Miragul Server: A New Type of Progression!
Looking to join a new community on a new type of server?
On November 5, in support of EverQuest II’s 15th anniversary, we are going to be launching a new type of progression server, named Miragul, that will start at the House of Thule expansion that launched in 2010. What does that mean?
You start as a Level 85 Heroic Character with live server experience rates, and all the trappings of a server that starts with a level cap of 90 with in-game housing, loads of raids, over 800 AAs, and more.
The server requires a membership to play and that’s it!
Click to expand...

They hinted at this during the last patch and the Devs are still holding true to their promise to Dev-splain their motivations for the changes they make. Looks like Bards (as well as every other class) will have the invisibility portion of Fading Memories (or whatever everyone else calls it) applied regardless of proximity to the mob. This was a major nerf to bards that came back in 2015 when they felt that they needed to punish everyone with the ability, including the classes that had it before everyone else. I think I like the new mana costs as well.

Read about it here.

On a side note, they snuck in a bit of bonus XP on us. Not sure about the rate, but /calendar says it runs until the 21st. Go forth and grind!
Continue…

Super exciting news about EverQuest this week, it's the second round of Fall Fun Bonuses!

The second round of Fall Fun bonuses is here, and more adventures are on the horizon!
From now until Monday, October 7, 2019 at 11:59 AM PT, ALL players will experience 50% shorter instance lockout timers!


Grab your gear and head into Norrath - there is extra adventuring to be had! And of course, be sure to check back on October 7 to find out what the last bonus will be!
Click to expand...

Also, there's something about an Omens of War expansion that I guess a lot of people like. It's pretty OK I guess.

Ha! Just kidding. Got ya, didn't I?
What has 2 thumbs and is ready for 5 more levels, amazing content, fantastic raids, great gear, and freaking epic Epic 2.0's?

Tomorrow at 5pm EST! Be there!
Continue…

It was a pretty big one [insert that's what she said joke here]. We dodged the Veteran AA nerf bullet, which was good. A couple upgrades, a couple nerfs. Here's the juicy bits:


That's what she said:
*** AA ***
- All - Refunded Identify as this ability is redundant now that item descriptions are displayed when inspecting items at level 50+.
- Multiple - Renamed the non-pet class ability 'Pet Discipline' to 'Companion's Discipline' to be in line with the naming used for pet classes.
- Bard - Granted the ability to use Double Riposte as Bards were the only class with the skill that did not have access to this ability. [I havent looked to see what level Bards get this yet -Loze]
- Bard - Refunded all ranks of Tune of Pursuance and increased the base tracking skill cap for Bards for levels 65 and 96-100+.
- Druid - Refunded all ranks of Advanced Tracking and increased the base tracking skill cap for Druids for levels 65+.
- Ranger - Refunded all ranks of Tracking Mastery and increased the base tracking skill cap for Rangers for levels 66-70+.

*** Miscellaneous ***
- You can no longer block, parry, dodge, or riposte an attack that would have missed.
- Made multiple adjustments to Tribute and Guild Tribute:

*** UI ***
- Made improvements to taunt messages:
- - Taunt messages are sent to all players in the area, and include the name of the NPC being taunted.
- - Added a new chat filter for taunt messages.
- - Failing to capture your target's attention is more clearly indicated as a partial success.
- - Added a message when a player obtains aggro using an aggro lock ability (Ex: Undivided Attention).
- - Taunt spells are no longer blocked by spells locking an NPC's aggro.
- - Sends a single message to players in the area when someone uses an area effect taunt (Ex: Area Taunt).
Click to expand...

The biggest nerf that effects us is placing the check for block, parry, dodge, and riposte AFTER the check to see if a mob's attack was a success. They claimed that it would be slightly easier on the servers to do those checks after a successful attack by a mob instead of after every attempted attack. This should really only effect the tanks, but we Shadowknights rely on procs and this will drop the number of chances we have to proc a lifetap. How bad is this nerf? People are screaming about it on the forums, but I'll have to see what the parses say. The nerf to the Bard AA Vainglorious Shout is probably the worst, but we won't have to deal with that for a while. Sounds like they may re-think the fading memories nerf though, which is good.